…You will be my witnesses in Jerusalem and in all Judea and Samaria,

and to the end of the earth.

The officer-in-charge was miffed. He went on leave and when he returned from his vacation he complained that,

It evidently made no difference whether I was there to look after things or not.

I had imagined that the condition of the cars, whether or not things were obtainable, the smooth functioning of the business of removing wounded and sick from the dressing stations, hauling them back from the mountains to the clearing station and then distributing them to the hospitals named on their papers, depended to a considerable extent on myself.

Evidently it did not matter whether I was there or not. 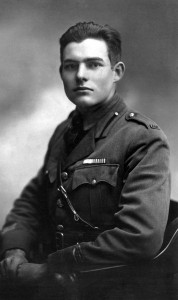 Ernest Hemingway was writing about the Italian campaign in World War One in Farewell to Arms published after the war in 1929. He unwittingly tells a management story. The young lieutenant didn’t quite know how professional management really worked – he had a competent team in place and they had executed delegated tasks in his extended absence.

This is every manager’s fantasy.

How is this done?

The best managers identify and groom staff with promotion potential to perform as his deputy; an acting boss. The deputy does what the boss would do if the manager had unlimited hours in the day. Even when the boss is on vacation.

Jesus is the ultimate manager and we have been deputized as outlined in Acts 1:8, You will be my witnesses in Jerusalem and in all Judea and Samaria, and to the end of the earth.

We are Christ’s witnesses.