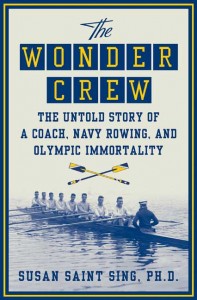 The Wonder Crew, The Untold Story of a Coach, Navy Rowing, and Olympic Immortality, written by Susan Saint Sing published in 2008 is the story of Coach Richard Glendon at the Naval Academy winning the Olympic Gold Medal in 1920 in crew.

The tale is set, “In a time when when admirals thanked rowing coaches for helping to win world wars.” p. 6.

Of all sports, I think rowing is the greatest…because it is a man’s game in every sense of the word.” p. 21

Rowing is the oldest intercollegiate sport in the USA as well as the oldest international collegiate sport in the world. It uses an eight-oared shell that is some 58′ long, weights 200 pounds, with a top speed of 18 knots. To power the small boat, Coach Glendon, “Was in pursuit of the ancient, elusive arete, the ancient Greek pinnacle of perfection, strength in grace of physical, mental and spiritual balance.” p. 22.

It wasn’t just a matter of who among them was the best. The individuals were less important than the whole – the [Naval Academy] brigade was the focus, not any one standout. No war was ever won with only one man. Though a brigade would follow the leader of one, that one needed a brigade to follow him. So, too, in rowing. The fundamental question was always “How did the crew look? And the crew was not just each man in seat; it was eight men rowing as one. The boat and the crew at large were a unit, the gestalt was the final equation, not the individual parts. In rowing truly the whole is greater than the sum of the parts.

A good man on a rowing machine, in training on land or in a weight room, might not help a boat go fast. p. 26

The rowers respected Coach Glendon, “He was the orderer of their chaos.” p. 26.

Appearances matter. Sing quotes Glendon, “You can tell a good oarsman sometimes just by the way he sits up straight in the shell.” p. 82.

A crew will pull some 200 strokes over a 2,000 meter course. “The shell capable of accelerating to 18 knots generates the most horsepower of any human-powered watercraft.” p. 88.

The oarsman is not a man alone. If his crew is to suceed he must become perfectly synchronized with the other men in the boat. Sometimes, for thirty or forty strokes–more if the crew is really good and well matched–all men in the boat will move together. Every move the stroke makes will be mirrored by the men behind him. all the catches will hit hard and clean…when that happens the boat begins the lift up off the water, air bubbles running under the bow, and there is an exhileration like nothing else I have ever experienced…literally like flying.

The personalities of each seat position are reviewed,

Bow should be neat and easy with his movements, above all a good waterman.

Two [seat] is ditto, but slightly heavier and stronger.

Three, four, and five the most powerful available.

Six seat should be a cleaver oarsman as well as being powerful, and of course…reliable.

Seven should be the most finished oar in the boat.

Stroke (eight) is the most difficult man to find, as he must combine so many qualities, but first and foremost he must be a man of the right personality, a real leader who will not be discouraged by adversity. His weight is immaterial. p. 162.

The 1920 USA Men’s Olympic crew was a barrier breaking performance, “Akin to what philosopher Michael Novak describes as the power of athletic achievement in revealing moments of perfect form.” p. 218.

“Rowing is not a game, it is much more akin to riding, skating, or dancing, or any other form of locomotion developed into an art.” Gilbert C. Bourne, A Textbook on Oarsmanship, p. 71

Chester Nimitz was the Fleet Admiral of the American Navy in the Pacific in WWII. He commanded over two million men, 5,000 ships and 20,000 aircraft. p. 23. Nimitz had said, “Dick Glendon, by what he put into successive generations of Navy midshipmen, undoubtedly helped us win the naval battles of World War I and World War II.” p. 242

Susan Saint Sing includes among the photographs a picture that hung in Coach Richard Glendon’s house. It shows Admiral Chester Nimitz signing the Japanese surrender documents on the deck of the USS Missouri ending WWII. It is inscribed, “To Dick Glendon with best wishes and warmest regards.”

The photograph is signed, “Nimitz–Fleet Admiral, stroke 1905.” It is not clear of which Nimitz might be more proud: ‘Admiral’ or ‘stroke.’