January 27; One Vision, One Goal, One Boss Ensures Success MANAGEMENT BY THE BOOK:365 Daily Bible Verse &One-Minute Management Lessons For The Busy Faithful

No one can serve two masters.

Either you will hate the one and love the other,

Your Business Professor has reported to many managers over the decades. And usually, like most staffers, I had only one boss at a time. But once as an entry-level, empty-headed, blank slate, I was assigned to report to two supervisors at the same time. 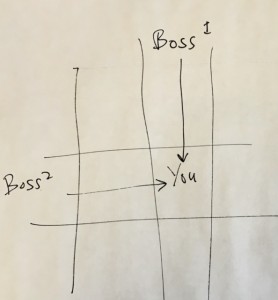 I usually upset my superiors one manager at a time, but having two supervisors enabled me to goof-up twice as fast. A double-play with one runner.

Assignments came twice as fast while my incompetence grew exponentially.

I was hardly able to follow the direction and vision of one boss let alone two. I was confused — which didn’t require two managers to accomplish. One was usually enough.

In my youth and inexperience, I didn’t know that I had been set up for failure — inserted into a matrix organization where one person has a dual reporting relationship. One staffer: two managers – recipe for disaster.

Scripture doesn’t care for it either. Matthew 6:24 says, No one can serve two masters. Either you will hate the one and love the other, or you will be devoted to the one and despise the other…

My experience actually went beyond the Biblical. I think both managers hated me. And I didn’t care much for both of them either.

A matrix organization is much like the movie of the same name: The Matrix. To execute a complicated story, it needs exceptional talent. And that wasn’t me.

A matrix can work with some high-end consulting firms or high-technology, medicine, or academia. This is where we might see really smart people in a temporary team, for a defined project, with a clear end point. It might work.

But not for most companies. A singular vision directed through a traditional pyramid chart still remains the best and most manageable template.